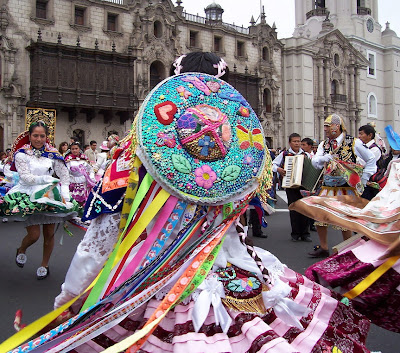 In 1535, on a sunny austral summer day, January 6, Francisco Pizarro and his men arrived in a fertile valley along the arid Peruvian desert. This rich agricultural valley was watered by a river the natives called Rimac, meaning the 'river that speaks', because of the sound of the water traversing across the boulders in the riverbed.

Within twelve days, on January 18, 1535, just 473 years ago today, Pizarro decided to construct a Spanish city within one of the more densely populated areas of the region. This is now the colonial center of historic Lima.

He placed his palace on the grounds of the house of the local leader, Taulichusco, the last indigenous lord of Lima. He constructed a Cathedral atop an indigenous temple, and laid out a checkerboard system of streets, although keeping some vestiges of the ancient pre-Conquest routes, including the one reaching the Rimac temple, now the Plaza Italia, and the route leading to the most important religious complex in the region, Pachacámac. 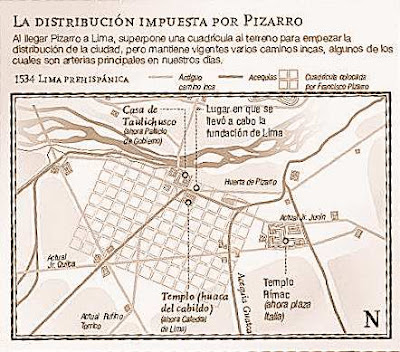 A map showing Pizarro's city overlaid on the original indigenous site.
Source: El Comercio
For much of its 473 years, Lima remained a small, albeit very wealthy, city which remained within the confines of Pizarro's original city plan. It was the capital of the Viceroyalty of Peru, the seat of Spanish power for all of western South America. After Peruvian Independence, it remained the most important city within the newly-formed Republic, a financial and academic center for the new country.

Lima in 1750 by French cartographer Jacques-Nicolas Bellin
It was only in the 1950s and 60s that Lima really began to expand beyond its original boundaries, and that growth spiraled in the 1980s and 90s as increasing number of migrants from other parts of Peru moved to Lima.

Today, Lima is a booming metropolis of 8 million people, with all of the hope, dynamism, and challenges facing a major city in a developing country like Peru. The dry desert of coastal Peru is not what many would consider the ideal site for constructing such an urban area, but from the desert, the city has grown.

To celebrate Lima and all its complexity, its good and its bad, its wealth and its poverty, its beauty and its despair, I am posting a photo I took a couple of years ago, of an indigenous procession in the heart of colonial Lima.

In many ways, history has come full circle. The economic growth Lima is experiencing in 2008 is no longer driven solely by the traditional elite forces, but also by the sons and daughters of those migrants from Peru's provinces who through sheer drive and determination are changing not only Lima's complexion, but its destiny.